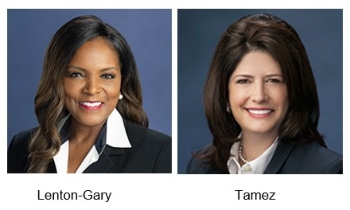 Houston Community College Trustees Dr. Cynthia Lenton-Gary and Dr. Adriana Tamez have been named among the Top 30 Influential Women of Houston by d-mars.com.

The two were honored earlier this month among a group of women who are successful in their professions and who possess a servant-spirit as leaders striving to break barriers in fields like education, broadcasting, medicine, law and government, and others.

Lenton-Gary and Tamez received their awards at a Sept. 16, 2022 gala at the Royal Sonesta Hotel. The Top 30 Influential Women of Houston Awards are sponsored by d-mars.com, an advertising, marketing, media and communications company. The agency works to inspire, inform and educate the Houston region.

“I am honored by this recognition of my work and to be among this very distinguished group of women leaders,” said Lenton-Gary, who chairs the HCC Board of Trustees and represents District VII.

She is an environmental chemist who worked as a research chemist and forensic scientist before leaving corporate America to pursue a career in education. She holds a master’s degree in sociology from Prairie View A&M University and a doctorate in Christian counseling from Newburgh Theological Seminary in Indiana.

Tamez, who represents District III, echoed Lenton-Gary, saying that the honor validates the work that people like Cynthia and I are doing to help ensure that HCC provides outstanding educational opportunities to those in our communities,” she said. “Our efforts are making a difference.”

Learn more about the HCC Board of Trustees by visiting hccs.edu/about-hcc/board-of-trustees.